So the month of November is over and with it my intensive yoga teacher training. Officially, I am now a 500-hour certified yoga teacher by theinternationally recognized Yoga Alliance and have a certificate in yoga therapy.

During the last four weeks I have not only studied yoga in many ways, but have lived yoga, thought and been yoga..

I took my course in Indore at the Paramand Institute. Indore is located in the state of Madya Pradesh, India. Here in the middle of the flat and rural plateau of the Indian subcontinent, I lived in an ashram with some other students. Wit all had our own room and were regularly fed with simple vegetarian food by our chef Annapurna (the name means the one who feeds us).

In the following I will give a small insight in my ashram everyday life and write about some highlights of the 4 week course.

My day started every morning at 5 am. At 5:30 am, my own self-practice began and lasted until 7 am. During this time I found time for myself, but also had to practice daily my three personal asanas (postures) and two pranayamas (breathing exercises) that were given to me by our Guruji. These were  rather advanced poses, such as the King’s Pidgeon, the Warrior 3, and Padangusthasana, a balance exercise squatting on one leg. Butthrough practicing themnregularly, I managed to master the three asanas almost perfectly.

After self-practice we had a 1 1/2 hour class with Guruji himself. Guruji (Dr. Omanand) directs this ashram, is president of the Hindu University in Florida and has written more than 16 books.

In his mundane classes we learned various meditation techniques, did case studies with his patients (yoga therapy) and were introduced into certain Shatkarmas (cleansing exercises). He introduced us to Shank Prakshalan (drinking salt water until the stool comes out of the intestines like like water and  a three-day diet afterwardas), Sutra Neti (pulling a path from the nose out of the mouth) and Kunjal (drinking salt water and vomiting it out again).

After the morning practise we had our breakfast Consisting of fruits and a light meal. More or less strengthened I worked on my karma yoga porject. Karma means action, work, etc. Karma Yoga means doing selfless service without having any expectations of the outcome of the work. The work should be perfected in such a way, that the work steps are automated and thus the mind comes to rest. I painted the goddess of arts and sciences “Saraswati” on the entrance wall of the ashram. 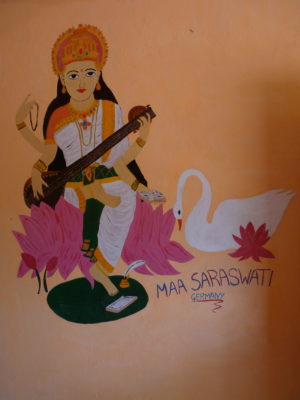 Saraswati- Goddess of Arts and Science

In total we had 2 hours before lunch and two hours in the afternoon.

In the evening we were introduced to meditation.

The entire class was given by excellent lecturers, all of them doctors or professors, who not only had extreme expertise, but above all a talent for teaching and a passion for yoga.

But the day would not have been so intense, were it not for one or the other homework and the written submission of a daily summary in the form of an daily email to Guru ji.

Sundays were off, so we often made group trips to nearby temples and the holy cities of Ujjain and Omkareshwar.

For me, the private ceremony with Guruji, in which I got my spiritual name “Maa Saraswati Ananda”, as well as my very personal mantra, was very special. For the ceremony I had to get flowers, Prasad (sweets as a sacrificial dish) and a mala (prayer chain). Freshly bathed and covered with my head, I began the very intense ceremony.

Another highlight for me, was the visit of the yoga therapist Dr Bandresat his working place. His healing methods and in-depth knowledge inspired me a lot for my future path in yoga therapy.

We also participated in funny events, such as “Yoga on the Street” on Sports Day in Indore, as well as an Asana and painting competition. So we were constantly busy!

Participation in Sunday Sports Day on the streets of Indores

The one month was unbelievably good, also because of the many great people I met there. I mentioned our teachers already, but there were also great employees there, who made our stay so comfortable. Especially the helper Mahesh, who has always met us with a smile, organized our tours and prepared our favorite food, is worth mentioning here. My fellow students became close friends and companions, some of whom I already miss, but will see again soon!