Everyone is welcome on this yoga journey. The yoga classes are adapted to the level of the participants. The activities during the trip are moderate and very feasible with a healthy physical condition.

On this two week yoga tour through Sri Lanka, we will use the first week to get to know Sri Lanka.

We will stay in a wonderful spa resort in the middle of The Cultural Triangle of Sri Lanka and from there we will make relaxing excursions in the surrounding area. The programme includes a tour of the famous Sigiriya Rock on foot and the historic town of  Polonnaruwa by bike. In addition, we will take a cooking class with a family in the middle of the village and observe wild elephants in their natural habitat during a safari through the national park. We continue to the famous tooth temple in Kandy and from here we will take on of the most scenic train routes through the wonderful tea plantations till  Nuwara Eliya. Here we take an early morning hike to the “World’s End” in the Hortan Plains National Park.

Every day Sarah will offer at least one hour of yoga. all physical activities are of course optional.

Afterwards we stay for a week at an Ayurveda Beach Resort with yoga classes, healthy and tasty Sri Lankan meals and Ayurveda treatments. 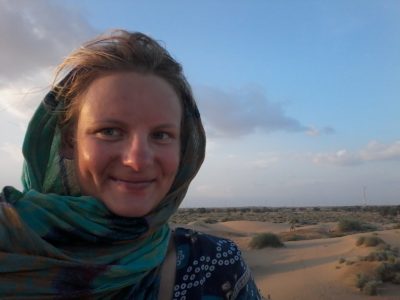 Sarah Appelt has been living in India for over 10 years and traveled to Sri Lanka in 2019 to explore India’s little sister. She was immediately scourged by the country and its people and now offers trips in Sri Lanka once or twice a year with local partners on her site.

Originally, she came to India as a volunteer for only one year at the age of nineteen. But she fell in love with the diverse country with its fascinating people, deep culture and enchanting landscapes. So she decided to have her home base in India, more precisely in the Himalayan Village Manali, from where she organizes adventure trips and yoga trips through India.

She has an 1000-hour certification of the Yoga Alliance in Hatha Yoga and Traditional Yoga and Yoga Therapy. In addition, she took courses in Shivananda, Yin, Ashtanga, Vinyasa and Kundalini Yoga and continues to train. For several years she has been leading yoga retreats in Indian yoga ashrams, conducting yoga trips in India and giving workshops in children’s yoga.

She designs her classes according to the needs of her students. She combines strengthening asanas with soothing pranayama and deep meditation.

We welcome you on a beautiful island in Sri Lanka. The proud history of the island of over 2500 years and the breathtaking variety of landscapes will conquer your heart and soul like no other destination. May the time you spend on the island be filled with exciting experiences. What will impress you most about Sri Lanka is the amazing variety of landscapes. It is possible to explore bright green rice fields, sun-tanned beaches, destroyed towns, small lively villages, near desert regions, wildlife reserves in tropical jungles and tea plantations in the hills literally within a few hours. Ancient Sanskrit literature refers to Sri Lanka as “Singhalesian” – island of The Sinhalese. The people with this name have inhabited this island since the earliest history. Traditions recorded in Sri Lanka’s historical chronicles go back to the exiled North Indian prince Vijay and his entourage, who settled on the island  in the 6th century. The Sinhalese kingdom was founded. However, the oldest known civilization dates back to 380 BC, when Anuradhapura (205 km from Colombo) was founded as its first capital. After the advent of Buddhism in the 3rd century BC, a civilization rich in Indo-Aric culture developed. It produced the big cities with their “dagabas”, which compare the pyramids of the Egyptian palaces and amusement gardens, the rich art and architecture and the gigantic irrigation works, many of which are still in use today. With the invasion from neighboring southern India, the power base shifted to Polonnaruwa (101 km southeast of Anuradhapura) and to other cities such as Dambadeniya, Kurunegala, Kotte and Kandy. In the 16th century, with the arrival of the Portuguese in 1505, the island had its first known encounter with the merchants and colonial masters of the West. This was followed by a period of almost 500 years during which the island came under the control and influence of the colonial rulers Portuguese, Dutch and British. While the Portuguese and Dutch ruled the coastal regions for about 150 years, the British established complete control of the island with the fall of the Kandyan Kingdom in 1815. They, too, ruled for 150 years before the country became independent again in 1948. The effects of many cultures over the centuries have led to the rich diversity of the country’s culture, of which many testimonies are present today. The island’s economy is traditionally based on agriculture with rice as its main food. Spices such as cinnamon, cardamom, clove, nutmeg and pepper have been exported since time immemorial, as have precious stones and even peacocks and elephants. With Western commercial influence, Rice gave way to money harvesting until the British made tea the foundation of the economy. The new boost in the economy lies in exports to the export-oriented industry. Agriculture is now being revived. Non-traditional exports of clothing, seafood, foliage, cut flowers and tropical fish, as well as the value-adding agribusiness, have contributed to Sri Lanka’s economic progress in recent years. The people of Sri Lanka have different races and religions. The majority are Sinhalese, who are Buddhists, while among the minorities the Tamils, mainly Hindus, are the largest, followed by the Moors who follow Islam and a sharply decreasing number of citizens descended from the Portuguese and Dutch, Christians are a considerable number of Christians among the Sinhalese and Tamils.

Although the country and its people are well on the way to modernization, they value most of their tradition and are proud of their rich culture. One aspect that continues to attract visitors from abroad is the beauty and diversity of the landscape as well as the warmth and hospitality of the people.

Warm and beautiful all year round it is in Sri Lanka. Average temperatures are around 27 ° C in Colombo and decreases by about 10° towards the mountain region. The island has two rainy seasons: between May and July in the southwest and December / January in the northeast. Climatically, Sri Lanka does not have a low season. Brightly sunny warm days are the norm and are also common in the western season. Sea temperatures are usually 27 ° C.

Understanding is rarely a problem, as English is understood in all parts of the country. Place names and signs are in the local language and often in English. Official languages – Sinhala, Tamil and English. National language – Sinhala and Tamil.

Filtered water and mineral water as well as bottled drinking water are available. The yellow king coconut is a popular thirst quencher and the most welcome drink is of course a hot cup of tea.