How to travel through India, depending on your budget

With an area of 3.3 million square kilometres, India is not only quite large, but huge! Especially as a traveller with not so much time, one really becomes aware of the size of the subcontinent when it comes to planning the India trip!

It quickly becomes clear, that many and long distances have to be covered, in order to get from one place to the next, 300 km and more in one stretch are not uncommon!

Fortunately, India is a relatively cheap travel destination with many transportation options !

Depending on the time and budget, everyone can plan their trip to India in the way that suits them best!

In the following I would like to present the main transport possibilities with their advantages and disadvantages.

But even if you have the money for flights and a private vehicle, I recommend that you at least take one overnight train journey! Travelling through India by train is simply THE type of travel par excellence and a must for every Indian traveller!! Travelling in and Indian train involves sharing treats with the other Indian passengers, drinking hot chai from small cardboard cups and spending a night in the gently rocking train compartment… Of course, there are also different classes for every budget on the train! 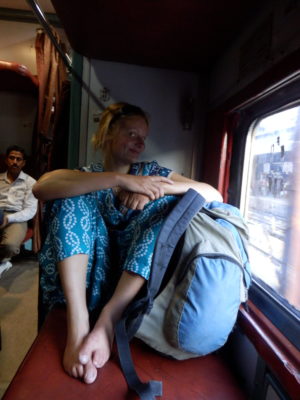 Over Night in the Train

As already mentioned – travelling through India by train is simply one of them. It is a pleasant and convenient way of getting around and also the cheapest option (if you don’t travel  1st class).

It’s just fun to stand at the open doors of the train and let the Indian landscape rush past you and unlike the bus, you can stretch your legs and even have your own sleeping place.

The “sleeper class” (the even cheaper general class is not recommended) is the cheapest option – here there are three opposite simple loungers on top of each other and another two on the other side of the aisle. The windows can (and should) be opened, because there is no air conditioning, but a few dusty fans. Bed linen, if desired, must be brought along by yourself. In a wagon there are about 50 seats with 4 toilets – two at both ends. Food and tea sellers, beggars and sellers of all kinds, regularly come by and provide some entertainment.

Sometimes the sleeper class is also overbooked – then it can get a little tighter, especially on weekends around the big cities and on holidays.

The two better (and recommended) classes are the so-called 2 AC and 3 AC. Coaches with three or two beds on top of each other and air conditioned. Here everything is a bit cleaner and quieter, fewer people are looking by and you get bed linen.

In special and faster trains between the capitals, there are usually only “AC” classes and you have catering included in the price. (One can choose between vegetarian and non-vegetarian).

In addition, there is also 1 AC, the first class, in which one divides a compartment in pairs. Not really recommended, because for the high price, you can also afford a faster flight.

The train ticket is either bought very long-term in advance from an agent (trains are often booked out months in advance), or you go to the tourist department in the train stations and request a ticket of the tourist quota (reserved seats for foreign tourists).

Buses are a bit more expensive and not as convinient as a train, but much easier to book at short notice (even just one day before) and in some regions (such as the mountains) also the only option.

They come in all variations: from the very simple state buses, to minibuses, to air-conditioned Volvo buses with fold-back seats or even “sleeper buses”, i.e. buses with real beds!

Meanwhile, the air-conditioned buses have partly WiFi and their own small screen at the front man’s seat. Private buses will usually show loud Bollywood films (no matter what price range).

At night (relatively late) there will be a stop for dinner.

The buses can be booked with any agent on site, as well as online.

In the “Local Bus”- better travel better only short distances!!

The so-called “Government” or “Local” buses are only suitable for short distances (not overnight) and are of course worth an experience!

India is cheap and even a rented vehicle including driver, fees and gasoline costs no more than 2000-4500 rs per day (depending on region, season, vehicle and route length) (between 30 and 60 €). It is a convenient way of getting around, you can stop and get off at any time and also easily get to more sly places. In addition, you also have a “local” in the form of a driver with you, who knows his way around and can often help!

Especially multi-day tours in Kerala, Rajasthan and Himachal, but also for longer one-way tours from one destination to the next, a car can be useful. (But then the vehicle costs significantly more).

Easy and fast- Long distances may also be covered by flight

India has a good air network with several different airlines and quite cheap flights. Long distances should be covered quietly by flight, especially if you have little time.

Flights usually cost between 50 and 90 euros. But of course always take the environmental point of view also in consideration!

Travelling on a bike- A special experience!

Personally, I love being on the road by bike – you just see so much more of the country. A motorcycle tour with a Royal Enfield is definitely a great experience, especially through the northern Himalayas (Himachal Pradesh, Kashmir and Ladakh), as well as in southern India. Easy a great travel option, whether private or organized by an organizer as a group trip. But also Bicyle trips are pure joy!