The three-week student trip in March had it all:

By bus, train, plane and car we toured all over India! We walked through the tea plantations of the Westerngaths, experienced the Holifest in Hampi, went by boat on tiger sight in the Ganges Delta of the Sunderbans, took part in a public yoga class at the Holy Ganges in Varanasi, visited probably one of the most beautiful temples in India and, and, and…

But read for yourself below! 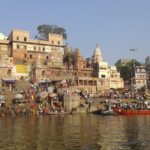 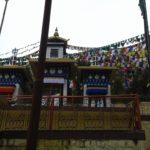 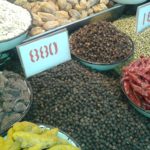 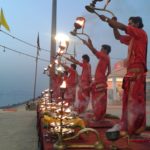 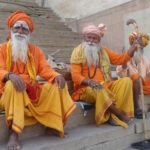 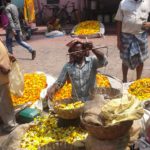 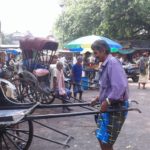 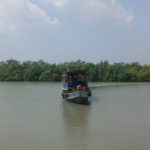 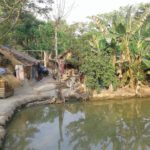 Village in the Sunderbans 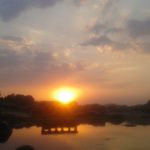 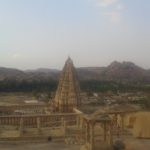 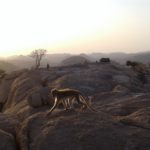 Monkeys near Hanuman Temple in Hampi 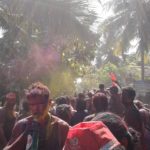 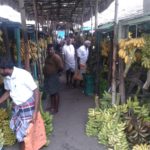 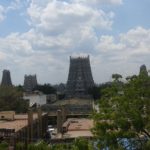 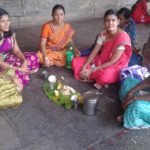 Ceremony for a Newborn 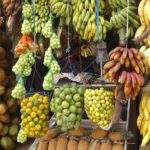 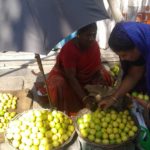 Limes sale on the street 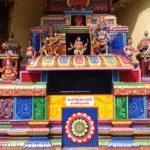 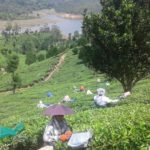 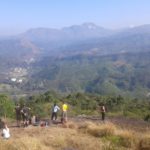 Day hike through the tea plantations 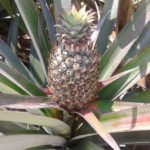 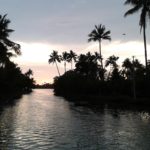 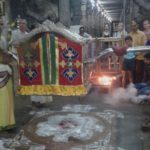 The Diversity of India

Three weeks for an ” All over India trip” is of course still too short, but at least a very good time frame, if you consider getting a comprehensive picture of India.

During 3 weeks, you can get a glimpse of the cultural and scenic diversity of India and with a little clever planning, you can have a varied and exciting travel program.

Admittedly, for those who want to see as much of India as possible, the 3 weeks trip will probably not be a relaxing holiday. So maybe you consider two or three beach days on India’s long coast at the end of the tour.

We covered more than 6000 kilometres by car, bus, Indian Railway, rickshah, boat and lane across India.

Through tea and Spice plantations in Kerala

At the very bottom of the south, our journey started in the green Palm state of Kerala. At the beginning of our journey, we had the luxury of a four-day car tour with a private driver. The distances in Kerala are Relatively short so that we quickly moved from place to place comfortably and experienced as much as possible from India’s southernmost state in a little time.

We spent a day (and one night) on a non-motorized Eco-Houseboat in the backwaters, a sprawling Canal system with many small islands on the Arabian Sea. From our little boat, we observed the peaceful fishing life of the local residents and even experienced a small temple festival.

We continued to Munnar, a small Town on 1600 m surrounded by several hundred hectares of tea plantations. A picturesque Hike led us through the tea and spices in the Western ghats.

The friendly tea pickers were only too happy to give their Scissors for a few minutes out of their hands to let us practice “tea harvest”.

Our last stop in Kerala was Thekkadey near the border to Tamil Nadu. Here we enjoyed a one-day hike through the adjacent Periyar National Park to spot wild elephants.

In addition, we undertook an instructive tour of a spice plantation and not only got an insight into the coffee, cardamom and pepper harvesting and production but also into Ayurvedic medicinal herbs.

A real highlight was the evening cooking course with Sheril! In a private cooking class, we learned to prepare a wide range of vegetables, fish and chicken dishes and also tried out the elaborate making of Parotas, a delicious multi-layer flatbread.

Then we crossed the border to Tamil Nadu and our driver dropped us in Madurai. A new section of our journey would start.

The sacred Temple City of Madurai

Madurai is mainly known for its enormous Meenakshi temple, which is famous with its many high colorfully painted turrets from the 6th century. the city itself has a 2,500-year-old history. Daily 15000 to 25000 pilgrims visit the temple of the goddess Meenakshi and her husband Shiva.

The journey to Hampi via Bangalore from Madurai with two overnight journeys by bus and train was not an easy one. But once you have reached this magical place, all effort is forgotten. Hampi, the world’s largest Unesco World Heritage Site, looks like a place from a fairy tale. Green paddy fields, crumbling temple ruins, palm trees, and rocks as far as the eye can see characterize the surreal landscape of the peaceful place. A small river crosses this place next to the historic buildings and is the place, where the temple elephant takes his bath every morning- just next to the many Indian pilgrims who are also taking a holy bath.

Here you will find probably the most beautiful sunsets in India and the relaxed backpacker atmosphere invites for a short break from intense traveling. In the cozy restaurants you can get freshly squeezed juices and Lassis, yoga classes are offered and Hampis rocks invite for extensive climbing- after all, Hampi is one of the most famous and largest Bouldering areas in the world!

We were very lucky (ok, not too lucky, I planned it :)), as we reached Hampi at the time of the colourful Holi festival. Hampi is one of the few places in South India, where the Spring Festival is actually celebrated and so we took part in the colorful spectacle with powder colour, water pistols and drumming music!

Calcutta- You have to have experienced this city!

From Hampi we drove back to Bangalore, then took a flight north to Calcutta.

If an Indian city is worth a visit, then it is probably Calcutta- or, as the Indians call it- Kolkata!

Here, Indian spirituality meets British colonial atmosphere; Poor next to rich; Muslims next to Hindus and rampant markets with narrow Alleys next to modern residential areas and huge malls! In other words, Calcutta is India in compressed form.

During our sity tour, we visited the Mother Theresa House, Calcutta’s large luminous flower market and the bustling Khali Temple in which hundreds of goats are sacrificed every day to appease the demon goddess Khali. We passed the “garbage mountain” the giant dump outside Calcuttas, crossed the landmark of Calcutta- the Howrah Bridge and passed colonial buildings from the time when Calcutta was the Indian capital of the British and a major trading city. Also a visit to the ceramics Quarter was worth a visit. All that was done by bike. Otherwise, we just captivated Calcutta with its yellow taxis, delicious desserts, running rickshaw men and chaotic Traffic simply.

Excursion into the Sunderbans

The Sunderbans National Park is part of the Great Ganges River Delta at the Gulf of Bengal in Bangladesh and India and includes one of the largest mangrove forests in the world.

Here countless river arms make their way between inhabited and uninhabited islands. The 10000 km² area is a habitat for mangroves, Dolphins, crocodiles and of course the famous Bengal tiger.

The two-day excursion through the Sunderbans provided a wonderful contrast to the hectic city life. Small villages, lots of nature and a spectacular wildlife were offered to us and we enjoyed the one-day boat trip through the mangrove forests. Although we missed the Bengal Tiger, we saw dolphins and even a huge crocodile! We lived in a small Eco Farm directly in a small fishing village. Here we were not only wonderfully treated with delicious food, but were given a wonderful insight into the traditional lives of people.

From Calcutta, we took the night train to Varanasi. Varanasi is one of the holiest cities in India!

During a guided walk through the narrow streets of the Old Town and the shore of the Ganges, we were deeply immersed in the Hindu Religion. We enjoyed the peaceful atmosphere, smiled at the “holy” Sadhus, observed Hindus taking a holy bath in the Ganges and were very fascinated by the burning ghat, were daily 200 gone Hindus are sent on to their way of liberation.

There is so much to experience in Varanasi and there is already so much to see, while just sitting on the ghats at the Ganges.

We took boat trips in the evening and in the early in the morning. Both times we took part in the elaborate fire ceremonies at the Ganges and even had the possibility to attend a public yoga class! What an experience!

On a journey through northern India, we also had a one-day stopover in India’s capital. Delhi is a good example of the immediate proximity of rich and poor: The spacious Connaught place, the green parks around India Gate and the comfortable Metro on one side. On the other side the slums, begging children and polluted air.

To the Dalai Lama

From Delhi it is a night drive up to Dharamshala to the beginning of the Himalayas. Here at an altitude of almost 2000 meters, the Dalai Lama lives along many Tibetan refugees, who have found a new home here in Mcleod Ganj.

After the three hectic cities of Calcutta, Varanasi and Delhi, we enjoy the relaxed atmosphere and clean mountain air. We do smaller hikes, spend leisurely time in small, Tibetan cafes, visited the Dalai Lama temple and the Tibetan museum. We also took part in a morning meditation session at the Tushita center and at a Tibetan cooking class to learn how to make momos -small steamed and filled dough bags, a Tibetan specialty.

The Dalai Lama we didn’t see, but instead the Indian players of the national cricket team, who had come to Dharamshala for a Test match against Australia.

As already mentioned in the beginning – in three weeks you don’t get to know the entire Indian subcontinent, but it is enough time for a small insight and to get to know a little the country and its people.

Such a journey is of course very intense and you will need at least the same amount of time to process all your impressions back home.

Check out here our 3 weeks organized ” Backpacker Trip“, which we organize individually and also as fixed departure tours.