Admittedly, the mountain village of Manali in the green Kullu valley is a beautiful place, but somehow I had the urgent need to leave for a short while, I was here now  for three months continuously and just wanted to get out for a few days.

I shared my wish with my Indian friend Jogi and was quite surprised when he agreed to my idea for a few days of “holiday” and even suggested to ride by motorcycle over the Rothang Pass into the Lahaul valley to the Chandratal lake. In Hindi, “Chandratal” means “Moon Lake” and in fact the azure lake, framed in the dry high mountain landscape of Lahaul, resembles a crescent moon.

I liked the idea and agreed. The next day we started early in the morning with the borrowed Royal Enfield towards Rothang Pass. Only a few days ago, the Rothang Pass was opened and up, near the highest point, the snow masses still piled up as thick walls to the right and left side of the road. Just behind the pass- it cleared up! View of Lahaul

We drove through the white walls and had a first magnificent view of the high Himalayas on the other side. In front of our eyes, snow-capped peaks rose as far as the eye could see, thick glacier walls were recognizable and we felt very small ourselves. While the first part of the route up to the pass was  on a well-tarred road, the road down became much worse and at some point it resembled only a narrow jeep runway with a lot of debris and many streams found their way across the road.

Travelling on a bike- A special experience!

Of course, so “early in the year” the snowmelt was still in full swing and the water masses had to go somewhere. The small streams were partly quite deep and while Jogi drove us through the waters with bravur, I just closed my eyes behind him and was always happy when we arrived  the the other side without a fall.

Slowly we drove through the Lahaul valley, always along the raging Chandra river. There is nothing but high mountains, rock and sand. Not a single settlement is located on the 70 km between the Rothang and Kunzum Pass. No tree grows up here at almost 4000 meters of altitude, hardly any human being meets us. Every now and then we meet a herd of sheeps, after the first 20 km behind the Rothang Pass comes a small resting point with two dhabas- indian simple eateries. In the temporary tent huts you can get simple food and a bed for the night. Here we had breakfast and enjoyed our in oil baked paranthas (with potatoe filled flead bread) with pickled vegetables and yogurt.

As soon as we went on, I could feel my back aching again. Such a Royal Enfield is quite cool, but nothing for the back of the pilion, even more on such a “road”.

But I kept myself brave on the machine for the next 40 kilometers, for which we needed at least two more hours.

Luckily, we stopped again in between. We discovered some great rocks, put on our climbing shoes and “bouldered” (climbing) a little on the rocks.

In the afternoon we reached our detination for the day: Bathal. Bathal is nothing more than a collection of temporary tents in the middle of nowhere at a bridge that crosses the Chandra River. We parked our motorcycle in front of the shelter and went inside. Inside it is quite cozy and pleasantly warm. With the disappearance of the sun behind the mountain peaks, it gets quite fresh and also really windy outside.

Here we were protected from wind and weather and sat down on the bolstered benches. We sipped a delicious sweet milk tea and looked around. Some truck drivers and shepherds sat with us. The owner stoked the fire under the stove once again and was about preparing dinner for all overnight guests. Otherwise, the interior of the tent resembled a small shop. Biscuits, crisps, drinks and chocolate were available for sale. In the back corner, an helper from Bihar snorted the vegetables, next to him ws the host’s wife who baked the bread. We enjoyed the relaxed atmosphere of nothingness and were looking forward to dinner: a kidney bean curry, cauliflower with potatoes, along with rice and bread. Delicious. Another sweet tea at the end, then we went out to our little hut. We did not sleep like the other overnight guests in the big tent, but had a small cottage for us alone. Well, the term cottage is probably a little exaggerated. Rather, it was a hole in a wall, laid out with mattresses and blankets and with a large board in front of it that served as a door. It was enough to sleep and I preferred not to think about who had slept in here before me. The next morning the sky was bright blue again and the sun warmed us beautifully with the powerful rays. We ate our breakfast outside and then headed to our current destination, Lake Chandratal. For about 14 km we drove on an even smaller jeep road until we stopped a few kilometers in front of the lake to walk the last stretch. Next to us, the two peaks C.B 14 and C.B 13 rose up steeply. Two mighty mountain giants, both over 6000 meters high and covered by a thick layer of glacier ice. Again we met herds of sheeps. Then we reached the lake. 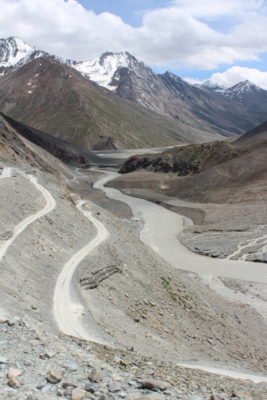 The first view of the lake was like a miracle: the blue lake stood in clear contrast to the rest of the light brown landscape and was nestled harmoniously against the surrounding mountains, which rose all around from the lake.

We were brave, took off our clothes and jumped into the freezing water immediately. Brrrr, the water was cold and the lake surprisingly deep! Afterwards we walked around the lake, at an altitude of 4200 meters no easy thing and our lungs were hurting

Before we drove back to our “accommodation”, we ate a simple noodle soup at a small tented place. Then we went back. But this time I drove!! I was introduced by Jogi to the arts of motorcycling and tried to balance the bullet through the high mountain desert. Not an easy task, but which I mastered quite well. Back in the tent we spent the rest of the afternoon drinking tea and helping with garlic and onion peeling. Tonight there would begoat curry served and we were very much looking forward to the fresh meat that the owner had received from the shepherd today. While we were cooking, the host told us about the snowstorms up here in the mountains and how  their guests themselves are sometimes cut off from the outside world for days.

He proudly showed us a newspaper article in which  was reported, how he once offered protection and care to more than 50 people. Here in the high Himalayas the weather changes rapidly and quickly there can be enormous snowstorms even in midsummer.

But we were lucky with the weather during our trip and were able to drive back to Manali the next day “quite comfortably”. After the three days in the mountain  desert I was happy again about the fresh green of the trees and meadows and my own bed. Manali is  beautiful…