We organize Race packages inclusive of a Mini India Trip at the end.

I can’t avoid it. There is simply this indelible thirst in me for adventure, nature, mountains, experience and physical challenge. All these components and so much more are include in the hard nine-day Hero MTB Himalaya mountain bike race,which I had already participated in last year. At that time I did not know what enormous challenges would I be facing and the combination of nearly 100 kilometers daily and technically demanding routes with several 1000 meters of altitude over several days brought me to both my physical and psychological limits that time. I’m not a real mountain biker, but I just love to ride my bike up and down through the impressive Himalayan mountains. I can ride uphill forever, but if there are technically challenging single tracks, I am often the first to get of the bike and push. Nevertheless, I made it and was able to enjoy the race in the end. As I said, I like it when I’m physically challenged. And that’s what I was, for sure-last year!

But besides the actual race, I just had such a wonderful time in September 2015. I loved the daily camps, the great food and especially the people around.

In addition to some mountain bike amateurs like me, the majority were ambitious bike racers such as Luis Pinto from Portugal, Andi Seewald from Germany and Catherine Williamson from the UK .  They all willingly shared their experiences with me and not only did I make wonderful friends, but I also learned an incredible amount in terms of riding technique, nutrition and equipment. 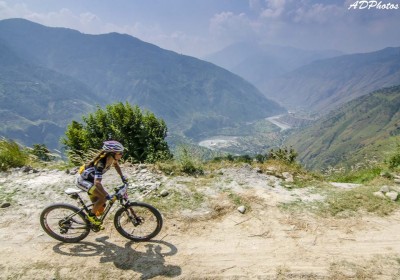 So last year’s race was definitely a success. Especially because I came through.

The months passed. I was busy with touring around India, teaching yoga and also occasionally taking part in a smaller mtb race in India, which I could even win in the women’s category.

But I was doubtful to take part in the Hero MTB Himalaya 2016. Sure, I had a great time. But I didn’t find time to train, minor health problems weakened me and my basic Trek 4500, with which I participated last year, was not only in a pretty bad condition, but also just too heavy. This year more professionals would participate with their top mountain bikes, I didn’t want to give myself this nakedness.

But then there were interesting news that I couldn’t resist. On the one hand, the route has been completely redesigned and the race was to start this year in Shimla, the former summer capital of the British, and end in Dharamshala, the residence of the Dalai Lama. Very charming, I am not so much a racer as interested in beautiful routes. On the other hand, former participants would come back from the last time, with whom I had formed a close friendship  and had not seen since. Impressions of the MTB Himalaya 2016

But the decisive reason for my re-entry was a surprising announcement: I would be officially accepted into the Indian Hero Action Mountain Bike Team at the start of the race! This meant sponsored entry fee by Hero Cycles/UT Bikes, a new bike and all-round supply during the race including new bike clothes. Wow.

I could not refuse this offer. The aim of this whole action is, by the way, that I should make themountain biking sport in India more popular among women. Even though I can’t compete internationally in the women category, in India I’m always way ahead of the few Indian women in cycling races. As a female sponsored Hero Action Team member, I will try to attract more Indian women for mountain biking.

So I had no choice but to travel to Shimla untrained and ill-healthed. 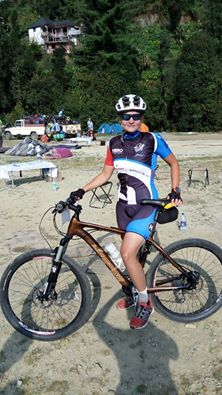 Me with my sponsored bike and clothes

For me, the award ceremony began with the press conference before the race: I received my new bike!!! Not the best of the best, but at least the carbon frame was much lighter, shifting, braking and suspension worked perfectly. At the press conference
Catherine Williamson, this year’s winner of the race, presents me with the Hero Action Team Jersey

This year the race was extended by another day with a total of 8 race days and a rest day in between. It was 650 km on jeep roads, forest paths and single trails and more than 15,000 meters of altitude. For the first time, the race would end in Dharamshala. In this twelfth edition of the race there were  68 participants, among them even 9 women. A much larger proportion than in recent years. We didn’t have an Indian female participant, but instead professionals like Catherine Williamson from Great Britain, Ilda Pereira from Portugal and Naima Madlen Diesner from Germany. The men were represented by Andi Seewald from Germany, Cory Wallace from Canada, Jason English from Australia and Thomas Turner from the USA are just a few names I mention here. From year to year the density of mountain bikers increases at MTB Himalaya, the race becomes more technical and harder. So just the right thing for me!

In addition to the many professional riders who expected an exciting race, many amateur riders from all over the world came to enjoy the beauty of the Himalayas. This year, by the way, we had a particularly large number of German participants. Monika and Frank from Peine spent their Honeymoon in India during the MTB Himalaya and promptly made the 3rd place in the team classification! All respect. If you want to read more about their storyit’s best to do so on their cycling blog

I myself couldn’t contribute much to an interesting race, because I was busy surviving. but I enjoyed the nine days in the mountains to the fullest!

To me, the race seemed, albeit technically more demanding, somehow easier or rather “more feasible” tahn in the last year. Although I had to push the bike a few times or even carry it. It is hard to believe that Andi and Co were actually still riding on these thin and stony paths. While I enjoyed the uphills and was able to overtake one or the other participant, I cursed during the technical descents often and vowed to train more technical riding until next year. One or the other bruise accumulated on my body, more because of carrying my bike so muh, than because of the minor accidents that happened to me. In fact, I once fell on a Singeltrail at an estimated speed of 2 km/h. Another time I rode into a car. But I was lucky, neither me nor my bike got hurt. I didn’t even get a flat tire! Puuhhh.

Funnily enough, problems with the bike always occurred in the camp. One time the pedals dropped, the other time the chain cracked and one time a tyre crack was detected. Well, lucky, all my problems, as well as those of the other participants, were fixed by the excellent mechanical team, consisting of Marco from Germany, Bruno from Portugal and the Indian Hero Cycle Team.

Route profile of the 3rd day. It went over the 3000 meter high Jalori Pass

The routes were great, we drove partly over 3000 meters high passes, crossed several smaller streams, as well as the mighty rivers Sutlej and Beas, drove through coniferous forests, over green meadows, stony boulders, orchards and had wonderful views. Sometimes there was hardly enough time to give enough admiration to the beauty of the green valleys and remote villages, but the landscape changed again and again. This year I could even enjoy the time in the camps. I only missed lunch once, when it took me a total of nine hours to reach the finsih line on the King’s stage. As a rule, however, I managed to arrive by 4:30 pm at the latest.

Leisure hours in the camp

Camp time, was called fun time! The chefs constantly served up new dishes in the food tent and most of the time we all spend propably eating. But we also sat nicely together, had wonderful conversations, stretched our bodies and took care of our bikes. 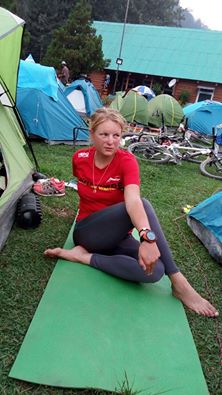 I stretch my tired body in the camp

There were shower tents with hot water, toilet tents with, well toilets and, depending on your wishes, one-man or two-man tents.

On our rest day, the race organizers also made sure that we could get a cultural impression of the region in the Indian Himalayas. So the participants could visit a school, a cultural music program was offered in the evening and food from the region was served! Great. Of course, I know “my Himalaya”, but it was also important to me, that my mountain bike colleagues were able to gain an authentic impression of my adopted homeland. Some race days were also very varied and exciting apart from the actual race. Sheep and goat herds crossed the race track, whole school classes cheered us up, cows blocked the route and loaded horses came to meet us. Sometimes I laughed, sometimes I had to actively chase sheep out of my way and every now and then I cried too. Eventually we ended up in Dharamshala and had a great closing ceremony in the international cricket stadium. What a great ending. Award ceremony in the cricket stage

But the real highlight happened at the very end. The organizers surprised us with a meeting with the Dalai Lama! Coincidently enough that the Dalai Lama was in Dharamshala, he usually travels the world. But now we were even allowed to meet him! The Dalai Lama’s charisma was very special, he made his jokes in this short meeting, shook my hand and took a group photo with us. Crazy! Many friendships were made

What a time, what experiences. And even though the mountain bike race was in the foreground, it was the great people with whom I was able to make intensive friendships during this time and who made these days unforgettable!