Bicycle trip to Rothang Pass and back

On the occasion of the soon happening mountain bike tours on the Manali Leh Highway and personal preparation, I rode my bike 51 km up and back down the Rothang Pass yesterday!

On the way to the Rothang Pass with the Mountainbikw

Cycling up from 2000 m to a  3980 metre high pass with a day was of course quite a hammer and was only possible for me because I am currently very well acclimatized and fit through my mountain tours.

But within 2 days  (on the 2nd day of the Manali-Leh-Highway Tour the Rothang Pass is crossed and it goes down to the Lahaultal near the district capital Keylong) the ride up the fascinating pass is possible, even without acclimatisation.

The Rothang Pass, although by far the lowest of the five passes on the Manali-Leh Highway, is arguably the most beautiful and most impressive pass.

The road across leads through green forests and meadows, passes countless waterfalls have and the rock formations are impressive.

Up till Marhi on the 36 km mark (all uphill) and on 3200 m, you should consciously enjoy its green and sunny surroundings, because after that it will be drier, rockier and treeless! View down to Marhi, the first Campsite during the 9 days Manali Leh Cycling Tour

Yesterday I cycled to Marhi within three hours to have my breakfast here.

From here I could already see that the typical clouds had formed high up around the Rothang Pass! It would probably become foggy again.

“Rothang” means “stack of dead people” . In fact, earlier, when the pass was only a walkable path, many crossers died due to poor visibility in the fog and the many rock falls..

Nowadays, the Rothang Pass is relatively safe. The road is well developed except for a few places.

The road constantly winds its way up to the very top, like a ribbon. It never gets steep, but the way is long and it goes higher and higher. The air is noticable thin now and breathing difficult. Ichange into a lower gear. Now it is only 16 km up till the top, but it seems to be forever. Paragliders with their colorful parachutes and a great last view into the Kullu valley delighted me. Then it became so foggy that I could hardly see the vehicles 50 m in front of me. Paragliders hover over me

For me, it is precisely these clouds that make the pass so unique! Snow, fog, traffic- the challenges of the pass

The Rothang Pass is considered a weather sheath. Till this point the monsoon clouds get, but no further. After about a hundred meters behind the pass, it will most likely be clear and the high and snow-capped peaks of the Lahaul valley will pile up infront of the eyes! Just behind the pass- it clears up! View of Lahaul

During the almost two hours (only 8 km/h and I am not a slow rider) it was not only foggy, but I drove through thick snowfields and also met one or the other herd of goats, then finally, with aching legs and a sore buttocks, I reached the colorful Tibetan prayer flags of the pass! 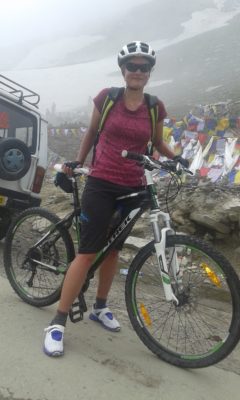 Finally at the top- after 5 hours of riding

But I was far from alone here: at that time of the year, hundreds of Indian tourists come up to the pass everyday, to “play in the snow,” as they call it. Through the thick clouds, you can hardly see anything, but it is somehow fun to watch how the Indians build snow figures, slide down the slopes on huge truck tires and stand on skis to be pushed on straight terrain on it. There are countless food stalls here and the Indians are in the best mood and enjoy their fair. Many of them have never seen snow before. Indians “play” in the snow

I prefer to go little further behind the pass, were it is quite clear and I enjoy the warming sun and the blue sky of the Lahaul Valley!

For the Manali-Leh tour we would now go down to the other valley, but for now i turn back – 51 km downhill to Manali!