I had survived my Transalp adventure well. After a few nice (and hot) days with the family, it was time for me for a new “mountain bike experience” in Germany.

The North German participants of the Transalp all raved about the highest German low mountain range, the Harz. Since the Harz is also only about 2 hours away from Potsdam, my native place, I wanted to “experience” the area myself. I was all the happier to appreciate that Frank and Moni, two great mountain bikers and resin connoisseurs, were planning a four-day mountain bike tour through the Harz and invited me to accompany them.

I had met them during the MTB Himalaya race in India two years ago and was looking forward to seeing them again in Germany. By the way, they have a very nice “Radlblog”.

Not only did Frank plan a perfect tour, consisting of countless hidden paths, interesting stops and nice overnight places, but they even organized a mountain bike including sleeping bag and mattress for me! The cycling holiday could begin!

Although we didn’t meet until 5 pm on Thursday in the Harz, this evening was already a real hit. Frank surpassed himself with his navigation crisscrossing the Harz.  I enjoyed the beautiful and varied landscape of the Harz. Again and again there were shorter ascents or descents, which were challengin, in between also flatter sections. After 30 km of almost exclusively trails we arrived in the late evening to our luxury accommodation: a refuge in the middle of the forest with wonderful views, balcony and picnic area. Moni served up a great dinner and in nature it tasted extra delicious. The next day was just as beautiful and it even went up to the Brocken, with 1141 meters the highest elevation of the Harz and a “must” for every visitor. From here we continued to the Wurmberg (971 m ) and especially the descent over the laid out paths of the bike park down to Braunlage was really fun. Although one or the other sliding passage made me sweat today and led to some upper arm training, but the descents rewarded with root passages and natural rock gardenss. An ice cream at the end of the day and then we went after a nice day circuit of 60 km back to the well-known refuge. Day three also led us to the most beautiful destinations of the Harz. We were completly alone on the small paths in the middle of the dense Harz forest. In the goat farm there was goat ice cream and goat sausage and at the big lake  we took a refreshing dip before we went to the Harzköhlerei Stemberghaus, where the life band of Monis and Frank’s wedding party played! The next morning after the party, we were all a bit tired the next morning and so we enjoyed the long descents at first. After a welcome coffee we were all a bit more alert and ready for a few technical trails to Hardburg. Here a well-kept old town with castle, old mill and half-timbered structure surprised, before we went on  via the “panoramic path”. From time to time we soaked ourselves through the ripe raspberries and blackberries on the side of the road. Frankkept the highlight at the very end: A kilometer-long path led us over a ridge almost all the way to Wernigerode, where our four-day tour ended.

Thank you Moni and Frank for the perfect tour through the Harz! 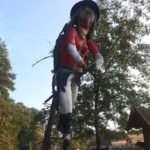 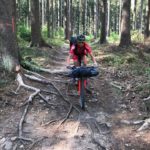 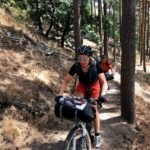 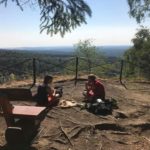 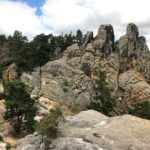 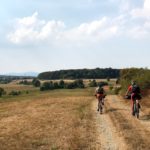 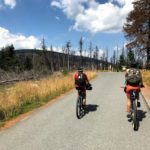 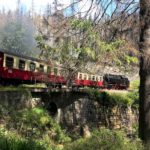 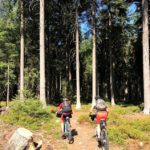 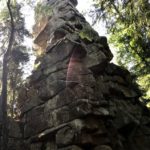 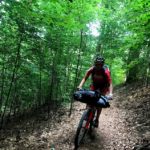 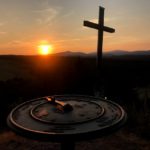 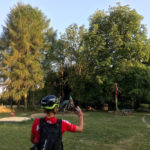 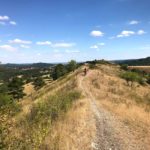