Mountain biking and India? What’s happening on the Indian subcontinent

Shimla, once part of the Nepalese kingdom, later summer capital of the British and now university town and mountain bike stronghold! The queen of the so-called Indian Hillstations is the capital of the mountain state Himachal Pradesh and is located at 2100 meters above sea level on a ridge in the foothills of the Himalayas.

A good 10 years ago, the first mountain bike races took place here. Participants were enthusiastic Indians from the surrounding area with very simple mountain bikes. Over the years, this has developed into an ever-larger sport. The middle class in India grew, the younger generation was more and more interested in adventure sports and the Indians made it a hobby to invest in ever better mountain bikes.

Meanwhile, Mounatinbike races take place almost every weekend throughout India and a large mountain bike community has developed. For the past two years, there has even been the first sponsored Indian cycling team: the Hero Action Team, sponsored by the Indian bike lord Hero: it consists of six young and very talented guys who are always at the forefront of the races in India.

The biggest mountain bike race in India and also one of the most demanding in the world (650 km, 15000 meters of altitude) is the seven-day MTB Himalaya race in and around Shimla. Last year, in addition to some Indian mountain bikers, more than 40 foreign participants took part and turned the race into an international event!

In addition, the organizers organize a smaller two-day race every year in April, which is also possible for the “normal Indian Mounatinbiker”. Simply to further promote mountain biking in India.

Me, not an Indian, but passionate mountain biker and at home in the Indian Himalayas for five years now, of course also took part!

While the male Indians are already quite proffesional in their approach to mountain biking, India lacks mountain bikers. In the last few years I was often the only participant and was content to compete against the men and get a little extra attention as a Western woman on a bike. Now there are at least a handful of women who also come to races, so I was able to compete in the women’s category last weekend!

Mountain biking and the Indian Himalayas simply go hand in hand: most roads are often undeveloped jeep tracks or forest paths that connect the small mountain villages, meandering ever higher and through green coniferous forests and rewarding them with incomparable views. Often they are steep, are crossed by streams or end up in a dead end. But the driving fun is immense, the mountain world enchanting and laughing children from the villages often accompany you for a few hundred meters, until they look at you waving.

Of course, it is doubly nice to race in such an area, because the best routes are assembled proffesionally into a great course!

This year’s two-day MTB Shimla race had a super-worldly number of participants with over 100 participants. After the first day of the race, a 60 km long route with some beautiful single trails, we reached a great camp in the middle of the Indian mountains. In addition to hot showers and soft beds, delicious food was waiting for us and we all spent the evening together at the campfire to exchange ideas about the first exciting day.

While the first day was a mix of uphill and downhill rides, on day two we went uphill for a good 38 km! For me, as a passionate climber, just the right thing, but the poor lowlands from Delhi had to fight quite nicely that day. After all, it was almost 2000 meters of altitude to overcome! The race ended with a magnificent view of Shimla at 2600 m – a great finish for a great race!

Oh yes, by the way, I won in the women’s category and also tried to make it a little harder for the men and ended up in 25th place. Not so bad. The Hero Actiom team was represented in the first three places.

Here are some impressions. A big thank you for the photos goes to Samir, Gitesh and Marian Brandriet, who took pictures during the MTB Shimla race.

Our jeep with the bikes from Manali 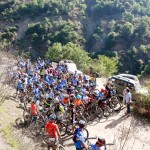 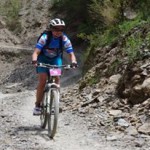 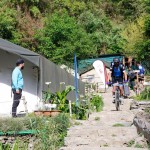 Cozy by the campfire 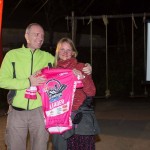 I get the women’s leadership jersey – it’s Pink 😉 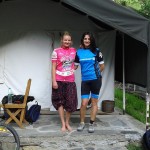 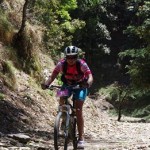 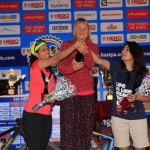