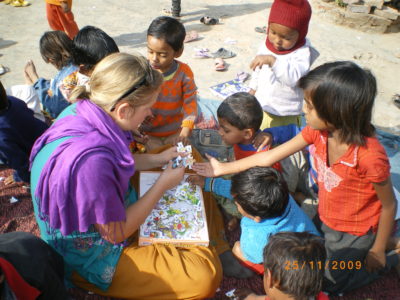 My life in India began with a year of volunteering in Delhi. I had participated in the program “Weltwärts” and was supported by the German state for a whole year to work with an Indian organization in a slum in Delhi.

Even today I often get questions about my volunteering and my first year on site in Delhi.

All the more exciting it was for me, when I came across and read through old reports I then wrote for my sponsors.

Almost 10 years ago I did the volunteering and I am grateful for these  memories. In the near future, I will publish all 7 reports on this blog. Here report number 1. Now the first four weeks of my India adventure have actually passed.

And as I can already say, India is truly an adventure in every way: millions of vehicles whose only commonality is a functioning (and constantly used) horn, children playing in the garbage in the slums, ear cleaners offering their services on the famous Connaught Place in central Delhi, the radiant Taj Mahal, which gives the impression of being glued to the blue sky , girls who paint my hands with henna, mass crowds in temples and mosques on holidays, delicious food and, and, and, and…

Revisiting my entire experiences, I must probably correct the above:

Now only four weeks of my India adventure have actually passed!!!

In the following, by the way, I will always talk about “we”. That’s because I’m here with another volunteer, Joanna, practically around the clock.

Delhi is huge. Around 15 million inhabitants live here in a confined space. Poor next to rich; Muslim next to Hindu; on the street, in villas; thin to the bones-thirsty or very healthy…

Delhi’s streets in particular are an experience and it took us a while to cross them. Everyone drives as he pleases, sometimes it is not at all apparent that there is left-hand traffic here, because from time to time the oncoming lane is simply used. Most cars do not have anything like side mirrors, the change of direction is indicated either by hand or horn andone is overtaken from all sides. Cars, trucks, rickshaws, cyclists, handcarts and cows roam the streets.

Where is the rickshaw??

If you are sitting in a bicycle rickshaw and are overtaken from both the right and the left by trucks that have a maximum distance of 10 cm, then one feels almost reborn afterwards.

But Delhi also has other faces that are far from exhaust fumes and deafening noise. There are beautiful parks and great historical sights.

Especially our residential area, Alaknanda, which seems to be a little more affluent, has a huge park, which we and hundreds of Indians use for morning sports activities. The only flaw: there are snakes. Not very many, but for being told in Delhi there are no snakes, I have already seen to

The Red Fort, Qutb Minar, a 27-metre-high column, India Gate, Hindu temples and mosques are overwhelming. I have not seen anything like it in Europe, with the exception of Rome, perhaps. Especially in the countless temples and mosques there is an engaging and contemplative atmosphere.

Otherwise, as in the rest of India, it is quite hot. Not necessarily unpleasant, but the sweat runs and runs. But it seems that the winter time is now beginning and the temperatures are decreaseing noticeably, which resulted in a small cold for me. The change just came too quickly. It had even rained.

Well, luckily I only had one day of really high fever and with every other day I’m getting better and better.

The Indians are an above-average friendly people. Despite language barriers, they always take a lot of time to help with questions, even if it can happen many times that one is sent criss-cross.

Often we are patterned by curious eyes and it often happens that at sights we become the real attraction when around us there is a circle of Indians who all want to take photos with us. Only sometimes it is a bit annoying for example, when you hear declarations of love after the first 10 minutes or are followed at every step of the way. From 9:30 am. in the morning to 5:00 pm we work weekdays for our organization ABHAS.

The organization is divided into several centers in different locations in Tughlakabad-Village. I wouldn’t call Tughlakabad Village a village. In any case, it cannot be compared to any village in Europe. But it is very different from Delhi City.

People’s houses are really nothing more than individual rooms, here and thereare mini “workshops” where sewing or repairing takes place. The paths are of course not paved here, especially when it rains, this fact becomes problematic, as the so-called path turns into a mud bath. There is garbage everywhere, sometimes we walk past real dumps where the children play together with the pigs. There are also cows and monkeys. Not to mention the dogs and cats.

Tughlakabad is a small municipality in its own right. During a conversation with the residents, it was said that hardly anyone ever leaves Tughlakabad. This fact, as well as the fact that many parents have also not received schooling, are one of the reasons why many children do not go to school. Especially the girls take care of their younger siblings, but often the children just are roaming around..

ABHAS is now trying to provide these children with at least a basic level of education, supporting especially needy girls with scholarships. They receive school supplies and afternoon lessons at ABHAS. Workshops on topics such as puberty and hygiene are often held or tinkered and danced.

But now to my personal work. Every morning from 10:00 am to 1:00 pm we work in a center for early childhood education. Children between the ages of 2 and 12 come here more or less regularly to receive, among other things, a basic education in reading and writing, to be cared for and to get a hot meal. These children are either early school leavers, have never gone to school or are simply too young to do so. Joanna and I have our own group here. Playfully, we try to teach the children both the Latin alphabet, as well as English vocabulary and sentence structures. In addition, we paint and sing a lot with the little ones or engage in sports with ball and bouncing games. The children are full of energy, very trusting and for the most part very inquisitive. I’ve really put them in my heart and it’s always a great pleasure to be able to be with them. In general, we are already fully integrated in this center, so that we also take on the tasks of the other teachers, such as the distribution of food. The afternoon has been a little quieter so far. We either sit at the workshops and lessons of the Scholarship girls, help with the medical examinations of these girls, tell a little about us and Germany or give small classes.

We are really lucky with the accommodation. With an older, compared to the average population, quite wealthy lady, our Nani (Hindi =grandmother), Joanna and I share a room with access to a private bathroom.

There is no shower. Instead, we have a water can of cold water, which we pour over us with a bucket of water. The water comes twice a day: morning and evening.

Since Nani lives in the upper part of the house together with her granddaughter and another woman (we haven’t quite solved the mystery of this person yet, she seems to be a mixture of employee and accommodated roommate of Nanis). we live in the whole lower floor, including a sleeping room, bathroom, kitchen and dining area. We do not receive food from Nani. At the moment we are trying to set up the most important staple foods (bread, sugar, salt, oil, potato, rice, fruit…). Although even this is associated with small difficulties.

We probably continue to order at “Motherkitchen”, a delivery service just around the corner with delicious Indian food cooked by a local.

We always get rice and roti (dough flats), with Dal (lentil porridge), a vegetable curry and yogurt.

Nani welcomed us really well, in the first few days she led us everywhere, answered questions and helped us with many organizational things. In fact, we have already made our first three-day excursion.  Agra, we have reached by train. The train ride in itself was an adventure. Wedged in crowds, with no freedom of movement for three hours. Not an easything.

The Taj Mahal in Agra, as well as all the other sights in the area, have made up for the strenuous ride.

In fact, the huge mausoleum is indescribably beautiful and seems completely surreal when you stand in front of it. Definitely worth a visit!

Joanna and I have actually managed to bring a certain routine into our everyday life. In the morning we go to the park for running, then on to work and in the evening Hindi and Yoga classes alternate. In fact, we have the ambition to learn Hindi as well as possible. And I have to say, we improve quite a bit. The Hindi alphabet, we can already read and also grammatical we have already progressed a bit. We already understand simple things and can make ourselves quite easily understandable.

The best thing that could happen to us here is yoga.. It is so relaxing and a good counterpoint to the hectic life in Delhi.

We often wonder what falls under the term “yoga”, but it just does us good.