A boy from my Yoga Children’s Camp and their family had invited me to the weddings of his two sisters and two cousins, all of whom were to be married on the same day and in the same house.

That alone sounded exciting! A wedding with four couples. In addition, I always wanted to attend a Rajasthani wedding. Because what many might not know: All over India Weddings are celebrated in a different way. Although the main components of a wedding are somehow the same. But in the details, the weddings are very different from each other. For my friend from southern India, for example, the wedding in the northern mountain state of Himachal Pradesh was as foreign as it was for me: people dressed differently, danced differently,ate differently and timings were different.

Here in Rajasthan, for example, everything happens at night! The main ceremonies take place from 10:00 pm to 2:00 am, which is probably due to the heat that otherwise prevails during the day. One of the rituals: Brides’ hands and feet are painted with Hennah

Dancing or even circumnavigateing a fire may not only be exhausting at 42°C, but also dangerous. In any case, it was always far too late for me, so I couldn’t even witness the full wedding. What probably wouldn’t have happened anyway, the rituals don’t just drag on for hours, but even for days!

But back to the starting:

I was looking forward to the wedding which was planned to happen 2 days before the Children Yoga Camp in the same village. May 9 must have been a very holy day this year in Rajasthan, as weddings have been scattered everywhere. Me in the middle of the brides and their families

I got special advice on the subject of gifts and got beautiful Indian fabrics for the four brides. But when I arrived at the ashram, the mood of our guru ji was not the best. Because among the four brides were not only three adult girls (all 20 and 21 years old), but also an 11-year-old child! Children’s weddings are still something very typical in Rajasthan and an issue that the guru here is trying to tackle strongly. I, too, am not in favour of child marriage in principle, but I think in general that the whole problem is rooted much deeper and that it has to be tackled from the ground up. The government also banned child marriage. A woman must be 18 years old and the man must be at least 21 years.. But that doesn’t bother anyone here. Above all, the somewhat uneducated and poorer class simply avoids this issue by marrying the children through the traditional ceremonies, then the children continue to live with their own families until full age, and only then signing the marriage certificate and moving the girl to her husband’s family. For me, no great difference, to the arranged marriage in adulthood, since the people here have no big say in their arrangement anyway.

I want to emphasis here that I am talking about marriage in rural Rajasthan. Child marriages and arranged marriages are still very typical HERE. Elsewhere, things are already looking very different. I know many marriages that were made by the consent of the bride and groom, and also many love weddings elsewhere in India.

After all, not every Indian is a rapist and not all Indians live vegetarian!

So, Guru ji was so strongly opposed to the wedding, but because all four girls were distant kinship he showed up anyway later onwards.

I was curious, had gifts with me and knew the family very well. After all, the bride Mum taught me how to milk cows! So I went to the party for a few hours. Me and my “teacher” milking cows. The teacher in the background is the mother of two of the brides

I was also very happy that I came. The girls were so happy and I was treated like a guest of honour. While two of the girls were quite excited and eager to get married, another girl, 20-year-old Janshi, was rather nervous and close to tears. Because soon, her life was to be completely different, with a new family and a husband. Little 11-year-old Urmilla seemed rather indifferent, as if she didn’t understand the great meaning behind the whole event. She just did what she was told.

It has to be said, that the girls went to the man’s family for one night the next day, but returned the following day to spend a relaxing month in the old home.

What I found very reassuring was the fact that the siblings Janshi and Koshal were floured with another sibling couple from a place called Bikaner and the other two sisters, Babita and little Urmilla with a sibling couple from nearby Nagaur. So at least the sisters would have each other.

One big reason why the child marriage took place was to save as much money as much as possible. A Indian wedding with more than 1500 guests and over several days is very expensive, especially for the brides family. SO rather organising 1 Wedding, than 4 weddings.

The little groom is welcomed

My gifts were received very respectfully with official photo. Documentation seems important and I was glad that they liked the fabrics very much. 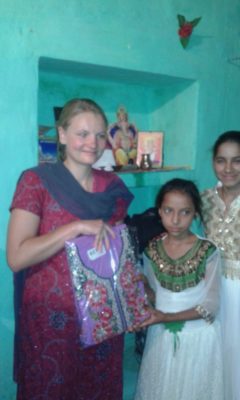 I present her wedding gift to the little bride

At the wedding, as at all the events I have been to Rajasthan, men and women were separated. Together with the women, I moved over to the grooms and their companionship, which consisted of hundreds of men. We honored the grooms with a homa, a fire ceremony, and I stole a samosa, an Indian snack that was apparently served only to male companions. The four brides are showered with yogurt

I also observed how the four brides were poured with yogurt over the hair by family members (whatever that means). They all sat lined up with a view to the wall, on which they had previously made a handprint with Hennah next to a painted Ganesha. Ganesha stands for every new beginning. Then I was dragged by the women into the huge dining tent. One remark again: the “higher men sat on chairs and at tables, the “simplemen” had at least tables and we women were fed on the floor. Well… I’m used to that from Himachal, just that everyone is sitting on the floor there. While it is common here to share a plate (!!!) with family members and good friends, I insisted on my own. I can eat with my hand and on the floor, but from a plate I prefer to eat alone. Food for more than 1500 guests is prepared outdoors

The food was ok, lots of desserts, chapathi, two vegetable dishes and lots of cold buttermilk. Especially the latter agreed with me! For me, it was time for bed. The actual ceremony took place around 10:30 pm.

I was just too exhausted. As the only Westerner, I got almost more attention, than the marriage couples and I already didn’t feel well. (By now I lie in bed with hellish headaches, fever, neck and limb pain). But he music sounded all night and the next morning the newlyweds were brought to their new home, again with a lot of music and under some tears. Whole buses left and calmness returned.