Finally! After living in Himachal Pradesh for four years, I have finally been officially invited to a wedding! At the age of 32, my working partner Pinku has decided that it is time to start his own family! His family, who has been waiting for this for a long time, has supported him in the search for his future wife and in the end it was his aunt who introduced him to Sita from Vaschisht. Pinku didn’t make the decision easy, he met Sita several times until they decided to get married.

Sita is 22, pretty and the very girl Pinku was looking for: Although she has a college degree, she loves the simple live at home. Vaschisht is about 6 km from Pinkus village and is located on the other side of the river Beas. Here it was also, where the engagement ceremony took place in June. The dates of the wedding (and also for all other related wedding work such as purchases, wood eravers and pre-wedding rituals) are not chosen arbitrarily, but are determined by a priest on the basis of astrological conditions. Here in the Kullu Valley, weddings usually fall in autumn or spring. Pinkus and Sita’s wedding date was set from 19.10 until 23.10. Yes, right: A 5 day wedding party!

The actual wedding took place on the 9.10. The so-called Barat. On this day, the groom and his closest relatives and friends go to the bride’s house to take her home. I too was in the wake of the groom, like about a hundred others, and in a great procession we marched to the bride’s house around 11 am.

Barat: We move with the Groom to the house of the bride

While the newlyweds and their closest family members were exposed to hours of ceremonies, I celebrated with the other guests.

We danced a simple traditional dance to the brass and drum music of a special group of musicians. There were also official dancers in uniform who indicated the sequence of the dance steps. In this dance, everyone is holding hands and performs simple steps while moving in a circle. Again and again the step sequences were varied, which was especially fun!

In between there were meals.Taking the food is also something very interesting. In bursts, one sits on a long white linen cloth on the floor in a row, then men come around with different Indian dishes. 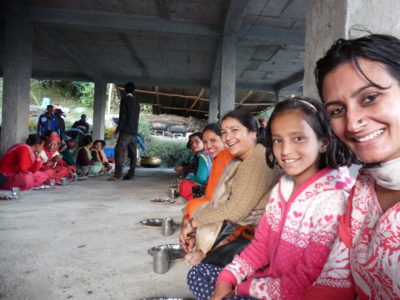 While in the morning there were various vegetables and breads, in the afternoon the very special Dham was served. The Dham is prepared only by high-caste special chefs in huge copper pots and there is a special sequence of various typical local dishes. Since until a few decades ago hardly any vegetables were grown in the Kullu Valley, but mainly legumes, the Dham consists of milk and lentil dishes. Every dish is eaten seperate along with rice. I had certainly eaten seven different lentil dishes at the end. 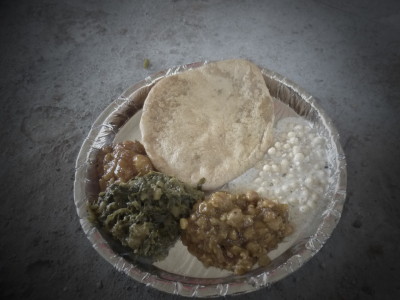 Around 4 o’clock the ceremonies were finished and finally we were able to admire the festively decorated newlyweds. The poor couple still had to sit and smile during the congratulations and receiving gifts of money from the bride’s relatives. In addition, the inventory of an entire bedroom was placed outside: a bed, bed linen, cupboards, various clothes and even a refrigerator. Anything that is sent with the bride to the bridegroom’s house. Gifts sent to the couple

In the evening the farewell took place and the newlyweds moved into Pinku’s house, again with countless rituals, also in the temple of the village where Pinku lives. Unfortunately, I can’t exactly re-enter all the rituals. On the one hand because I didn’t see much of them, on the other hand because I do not understand them (even the locals do not seem to know exactly when what happens and could not explain anything exactly to me), but also because there are just so many rituals!!! Even the rituals before the actual wedding, which take place separately for the bride and groom, are enormous and involve painting the hands with Hennah ( Mehndi), a certain ritual with a ribbon, and, and, and…

The next day the so-called reception of the newlyweds took place. This is the day when the actual wedding is over and the time for celebration. (The bride spent her first night at her new family home) On this day up to 3000 guests come. All guests give a small or larger contribution to participate in the cost of the wedding. On this occasion, four goats were slaughtered! It is danced, drunk and eaten a lot!

In the afternoon there were many different snacks

Interestingly, men and women are very segregated, both on the dance floor and when eating food. As the evening progressed, however, the atmosphere became more and more exuberant and while we danced to local music, all mixed well. I even danced with Pinku, the groom! Rarely have I seen him as radiant and happy as on that night! We danced for four hours until the singer finished around 12 o’clock. What a great day!