.. and in India it is also often quite adventurous! I am currently sitting in the DURONTO – Express from Bangalore to Delhi. Estimated travel time is 31 hours: two nights and a full day over more than 2400 km across India. Our train is fast. It goes without a stop to Delhi, on previous trips we needed almost 10 hours more for the same route, but also had the experience to visit one or the other station. 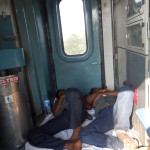 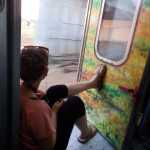 Relaxing at the open door, a unique experience! 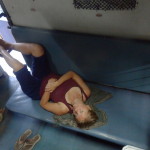 In the Sleeper class. 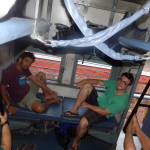 For me, this train ride means relaxation and luxury compared to previous ones: we have booked the class “3 A/C”, which means air-conditioned, a bed in an eight-bed compartment with sheets, blanket and pillows and complete catering including water, chai (tea)  and non-veg. Between the wagongs there are  garbage bins and in the relatively clean bathrooms there is even soap!! We have also paid a much higher amount for this: 3500 rupees, more than 40 euros. For the non-AC version, called Sleeper Class(which is not offered at all in this fast train), we always paid around 10 euros. Thus, train travel is really the most popular (and cheapest) way to travel across the country in India!

In sleeper class you have a bed in an eight-piece compartment. The middle beds can be folded in during the day. Here there are fans on the ceilings, which swirl through the dust and warm air and barred open windows. While one sticks to the sweaty seats during midday, it is great to just get up and stand at the open door to let the landscape pass.

As the hours pass sluggishly on the train and you wait for the next meal or sales men (everything is sold, about jewelry, snacks, clothes and books), the train gradually pollutes. The Indian passengers seem to care little about the cleanliness of the train, as well as nature (waste is usually thrown out of the windows due to a lack of garbage bins), one tries to touch as little as possible and is happy when at least the visit of insects is limited. You are lucky if the water in the tanks reaches to the last station and in the morning there can be long queues in front of the toilet.

Also, you should try not to do your big business during a station stop, as the product falls directly onthe rails through a hole.

And yet, a train ride in the Sleeper compartment is part of the Backpacker Travel Experience in India. Nice conversations with fellow passengers who like to share their homemade food, trying out unknown snacks at the train stations across India and the passing landscape of India, almost make up for the strenuous train journey.

The highlight is probably standing at the open train doors: while the wind refreshes, land and people pass you!

A little irritating are the so-called Hijhara, the outcast men in women’s clothing who have a special position in India. They cross the trains to put men travelling in a somewhat uncomfarable situation to demand some “Bakschich” for keeping distance and “not being cursed”. Also, many beggars, old and young, sick and disabled, come through the train. For this it is always advisable to carry some small coins along with you!

Now, however, all this is far from me in the more luxurious train. Relaxed I sit next to the window, enjoy the view outside and just rest from the travel efforts of the last month through South India.

If someone had told me beforehand how relaxing such a long journey could be, I probably wouldn’t have believed it!

Now this class is not even the best: there is a clasp, with only 6 beds per compartment (2 AC) and the first class in which only 2 or 4 people share a compartment with toilet. For this class, however, the ticket is already so expensive that one could probably afford a flight.

I had my longest journey last year in April, the hottest time in India: We traveled more than 50 hours (delayed included) in the unair-conditioned Sleeper Class. A ride I wouldn’t recommend to anyone who can afford an A/C class or  a flight. With 2 nights and 2 days train ride you have to be very good in doing nothing and sitting.

Also with the route between Delhi and Jaisalmer I have not been able to have good experiences in the Sleeper class. On this route, trains in both directions are so crowded that, despite the space booked, there are often twice as many people in the compartment as seats.

Then prefer to book A/C, which these compartments are closed to travellers without seat reservation.

There is another class below the Sleeper Class: the General Class, which does not exist in every train. There are no seat reservations here and the compartments with their wooden benches are filled up till the ceiling, an experience I had to make as a nineteen-year-old together with a friend on the route from Jaipur to Delhi and would be reluctant to repeat.

So a train ride in India is like everything in India: you have to get involved, you don’t know what to expect and often there are positive surprises and with certainly a lot of experiences!

The best sunsets, the most beautiful impressions and the most interesting encounters I had on Indian trains!